By Gatwin February 21, 2010 Post a Comment
If you come to Yogyakarta, don't forget to see art dance performance called Sendratari Ramayana in Candi Prambanan. Candi Prambanan lies in the east side of Yogyakarta, it takes only 30-40 minutes driving from central of Yogyakarta. You can drive a car or just take a bus from Yogyakarta to Solo, and stop in Candi Prambanan that lies in the left side of Jogja-Solo street. For those who loves art, surely will love this performance. The epic stories of Ramayana was choreographed beautifully in series of dance. The story of Ramayana itself tells about the love journey of Rama-Shinta and the struggling between the good and the evil Rahwana. 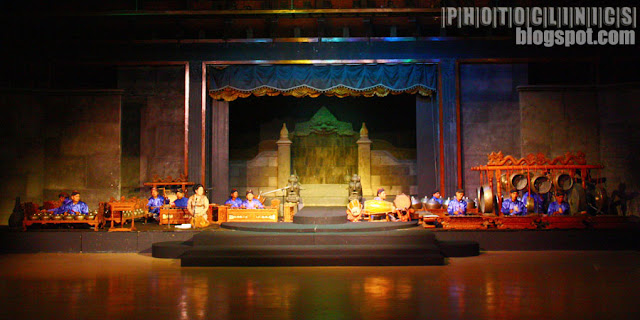 Recently i watched the indoor performance of this dance last December 2009.  I' paid IDR 125.000 for special seat right in front of the art performance. I think the best view to watch this performance is in the front of the stage. For ticket reservation you can call the agent at (0274) 496408. In this post i will share the picture I've taken and the plot stories of Ramayana Dance performance that I've read from the brochure.

Prabu Janaka, the King of Mantili Kingdom has got very beautiful princess named Dewi Shinta. A competition is conducted in order to decide who will be th right person to marry Dewi Shinta. The prince of Ayodya Kingdom, Rama Wijaya at last wins the competition. Prabu Rahwana, the ruler of Alengkadiraja Kingdom is eager to marry Dewi Widowati. After knowing Shinta, he assumes that Dewi Shinta is the incarnation of Dewi Widowato whom he is wanting for along time. 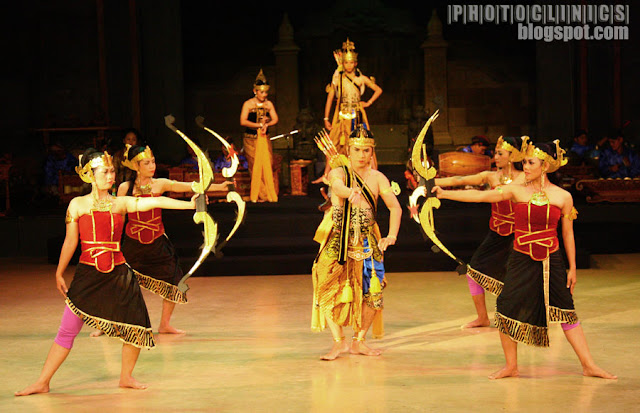 DANDAKA FOREST
Rama Wijaaya, the princ e of Ayodya Kingdom along with his wife Shinta accompanied by his younger brohter Leksmana is adventuring until they arrive in Dandaka forest. Meeting shinta in the place, Rahwana becomes eager to posses her. In order to realize this idea, Rahwana orders one of his followers named Marica to change himself as a Golden deer called Kijang Kencana so as to attract Shinta. Being interested in the beauty of the deer, Shinta asks Rama to capture the deer for her. Rama leaves Shinta and start hunting the deer.
After waiting for a along time, Shinta become nerveous as Rama has not arrived yet. She asks Leksamana to look for Rama, before leaving Shinta alone, Leksamana draws a magic circle on the ground to protect her from any possible danger. As soon as Rahwana notice that Shinta has been left alone. Rahwana tries to kidnap Shinta but he falls because the magic circle. Then he changes to be an old beggar. As soon as Shinta gets out from the magic circle to give a hand to the beggar, He takes her and fly her to Alengka Kingdom. 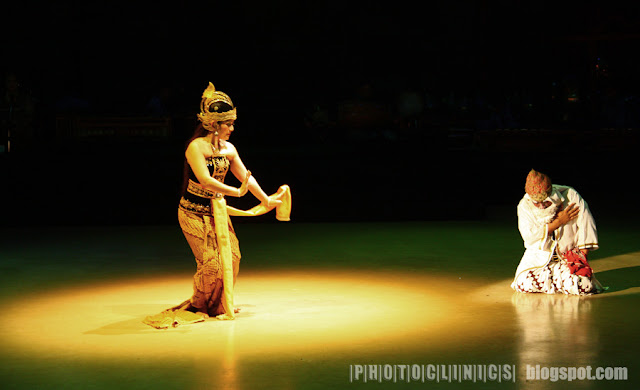 RUNNING AFTER THE DEER
Rama shoots the deer with his magic arrow, but the deer commutes to a giant (Marica). A war breaks between Rama and Marica. Rama shot Marica wit his arrow. Later on Leksamana arrives and requests Rama back to Shinta's place.

THE KIDNAP OF THE SHINTA

On the way to Alengka, Rahwana meets a bird named Jatayu. After noticing that Shinta is the princess of Prabu Janaka, Jatayu attacks Rahwana in order to escape Shinta, but he is defeated by Rahwana. After finding out that Shinta is not in her previous place, Rama and Leksamana decide to search Shinta, later on they meet seriously wounded Jatayu. Rama thinks it must be Jatayu who has kidnapped Shinta. Rama decided to kill him but Leksamama prevents him to do so, Jatayu explains waht has happennned to him then he dies. 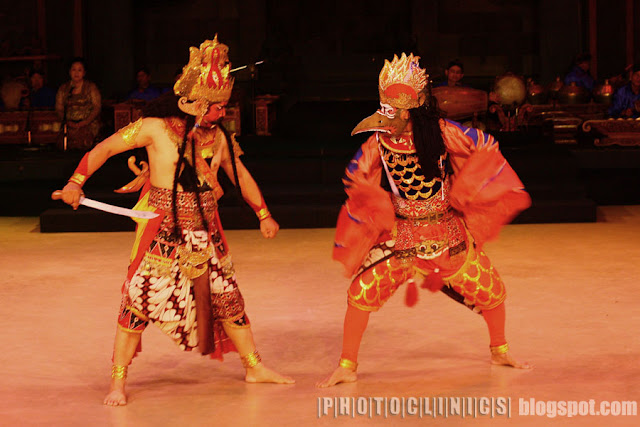 A momemnt later, a white monkey named Hanuman arrives. He is delegated by his uncle, Sugriwa to look for two heroes who can kill Subali. Subali is a sacred man and has taken Dewi Tara, Sugriwa's beloved woman by force. Rama decides to help Sugriwa.


KISKENDO CAVE
When Subali, Dewi Tara and his son are chatting, Sugriwa arrives. WIth the help of Rama, Sugriwa attacks him. Subali is defeated by Sugriwa and takes Dewei tara with him again. Sugriwa decides to help Rama to look for Shinta. For this purpose, Hanuman is sent as envoy to Alengka Kingdom.

AGRASOKA GARDEN
Rahwana's niece, Trijata is comforting Shinta in the garden. Rahwana arrives and asks Shinta's willingness to be his wife. Shinta refuses to do so. This make Rahwana angry and wants to kill her, but Trijata prevent and said that he should be patient and Trijata promises to look after Shinta. It was when Shinta is very sad that suddenly she becomes started to hears a beautifull song which is sung by Hanuman, the white monkey. Hamunman tells his purpose to escape her, and this duty is ordered by Rama. AS soon as he explains the purpose Hanoman starts to find out the total power of Alengka's army. The he destroys the garden. Indrajid, Rahwana's son capture him. Kumbakarna prevents, be he is thrown out of the kingdom. Hanuman is sentenced to be burnt alive. Hanuman with fire arround his body burn out Alengka palace. 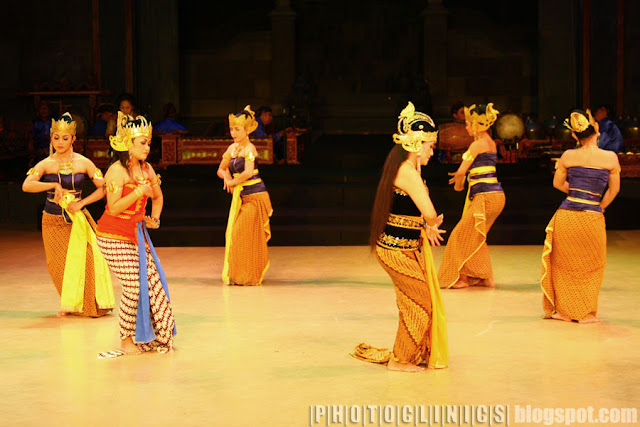 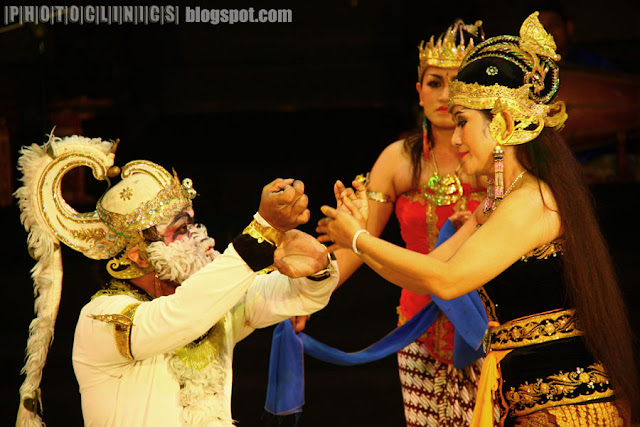 RAMA'S BRIDGE
After delegating to Hanuman, Rama and his ape troops go to the sea and make a bridge for running to Alengka. When the bridge is finished. Hanuman comes and reports about the Alengka's situation and its troops power. Receiving the report, Rama is very happy and commands Hamunman, Hanggada, Hanila and Jembawan to lead the troops attack Alengka.


THE TOTAL WAR
When giants troops of Alengka are in their guard at their country boundary, the are suddenly attacked by the ape troops. Therefore a big war betwwen them. In this war Indrajid is killed by Leksamana. Kumbakarna, the younger brother of Rahwana died as a patriotic hero. After the death of Kumbakarna, Rahwana finallay become the commander of the Alengka troops to face Rama. In this war Rahwana was killed by Rama's arrow and Hanunma drips the mount of Sumawana on Rahwana. 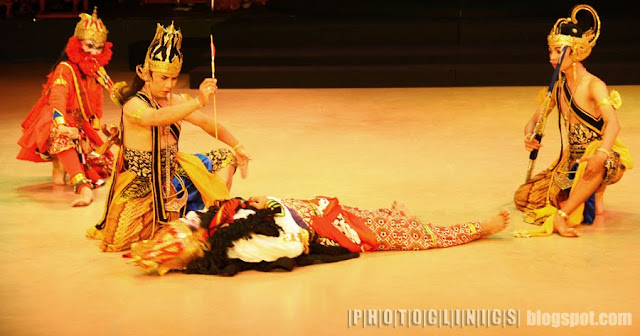 THE MEETING OF RAMA AND SHINTA
After the death of Rahwana, SHinta, accompanied by Hanuman, meets Rama. Rama refused to accept her as he considers Shinta is not pure anymore. In order to prove her purity Shinta burns herself. With the help of God of fire, Shinta is saved from the fire, her proof make Rama happy and finnaly accepts Shinta. 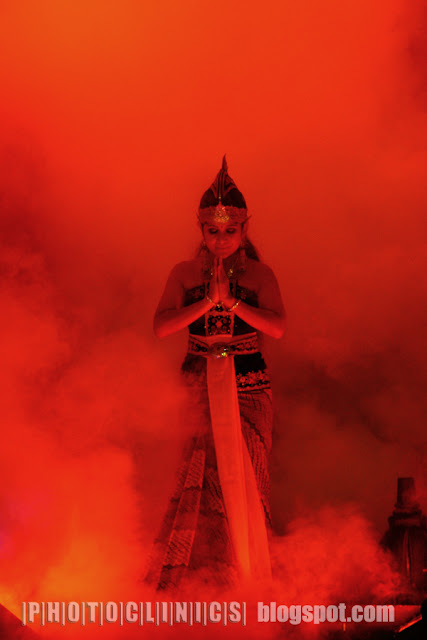 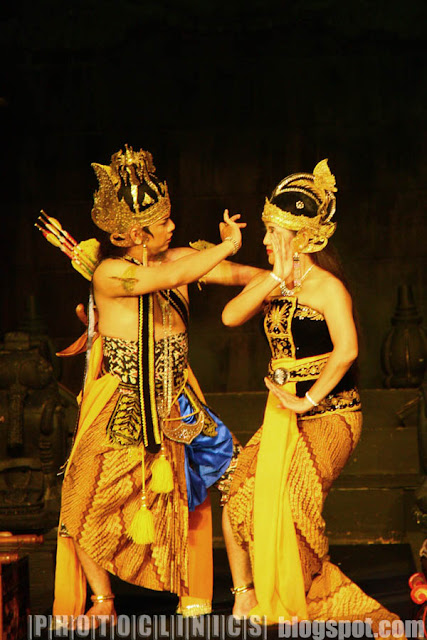 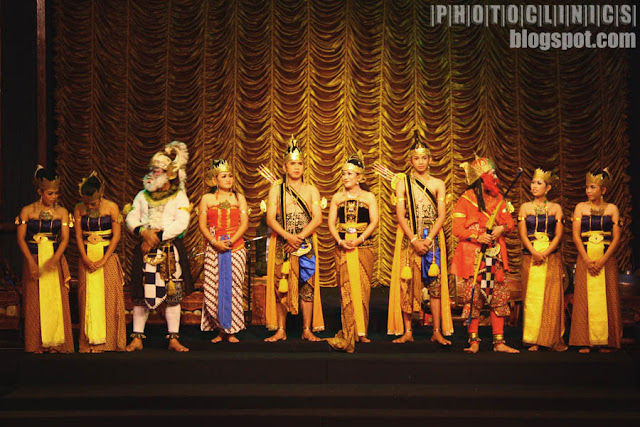 Thanks for all of friends who give the information about the show. Still wanna watch the show again with better camera, with higher ISO sensitivity and dynamic range. 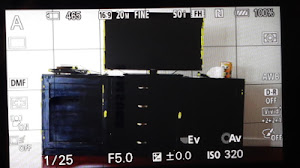